This is a post from my website http://www.MosaicConsultingOnline.com about my recent trip to Dubai.  I thought it was appropriate to repost here because this blog is all about money, and –well, heck–so is Dubai!

Last December, I visited Dubai.  It was my third visit there and a real eye-opener.  Not only is the city more developed in terms of finished projects and infrastructure than the last time I was there (in 2007), but the energy of the city seems to be different as well.  Back in 2007, the city was still being developed and buildings were going up at a frenzied pace.  The unique Dubai skyline was cluttered with skyscrapers in all shapes, sizes and phases of development accompanied by tons of cranes as far as the eye could see.

This year, however, it took me a few days to finally notice that the cranes were not there.  Whether there were fewer cranes than before was a result of the 2008 downturn that hit Dubai pretty badly, or that the building of  skyscrapers was just slowing in general (doubt it), I can’t be sure.  But this time, along with the presence of fewer cranes, a new Metro aboveground subway system, easier to navigate roads, and traffic that seemed manageable, I felt like I was in a new city.  The city seemed more established, like it had been there all along, and older than its actual age (the United Arab Emirates just celebrated its 40 year anniversary on December 4.)

When I was there last, the Burj Khalifa, the tallest tower in the world, was still being built.  From any point in Dubai, you could look up and see the skeleton of the tower, with hundreds of workers diligently hammering its parts together.  At that time, such a thin and tall structure looked like it could easily snap in two.  The completed version is actually quite beautiful and substantial.  Standing at over 2700 feet tall and more than 160 stories high, it is the tallest building and freestanding structure in the world.  It houses retail stores, residences, offices, restaurants, the Armani Hotel Dubai and a park. 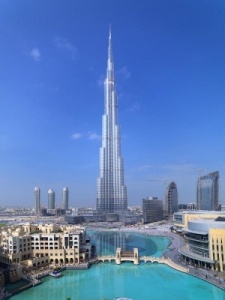 Along with having the tallest building in the world, Dubai is also known for being over the top in other ways.  It is home to Wild Wadi, a 12-acre water theme park; Ski Dubai, an indoor ski slope complete with a cozy lodge situated halfway down the “mountain” and has the yummiest hot chocolate; and tons of huge malls (one containing Ski Dubai, another in the shape of a pyramid, another completely decorated in gold lights on the outside and sporting a Venice theme on the inside).  And let’s not even talk about Dubai Mall, a mall with an indoor aquarium, and a place you would have to visit every day for a week to see every store, boutique, restaurant and café.

Oh, and let’s not forget the famous Palm Islands, a series of man-made islands in the Arabian Sea developed in the shape of a palm tree that house condos, villas, hotels, restaurants…. and the second Atlantis Resort (the original is in the Caribbean).  I did say that place is over-the-top, didn’t I?

The One-Stop Shop of the World

Every brand from every corner of the world seems to be present in Dubai, from Debenhams to Harrods’s to the Gap, Claire’s Accessories and Forever 21 to Promod and Mango to Topshop to Ermengildo Zegna.  In every mall I visited, it was hard for me to find a store I didn’t recognize.  I would have to pass Aldo, Nine West and Jimmy Choo in order to check out shoes from a new Italian retailer.  I huffed past Reiss, Zara and Tory Burch to window-shop at a French boutique.  I passed Gucci, Pucci and Miuccia (Prada) to marvel at Dior, Chanel and Missoni.  Basically if you can afford the inflated retail prices (thanks to the rich Saudis, Russians and Iranians who visit Dubai to shop) you can find whatever you want in Dubai. 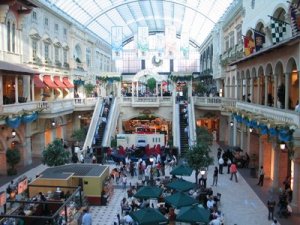 You need anything? You will find it in Dubai!

The Most Inclusive Buffet

And if you’re hungry, the sky’s the limit in Dubai.  Along with chain restaurants from Lebanon and Jordan, Dubai is chock full of European and American chains.  They have Wagamama, a London-based Japanese noodle bar, Paul, a French patisserie that’s all over the Middle East and Europe, Costa Coffee, Starbucks, Café Nero, P.F Chiang, California Pizza Kitchen, Coldstone Creamery, Macaroni Grill, Texas Roadhouse, Pizza Hut, Trader Vic’s…The list goes on!

The specialty in Dubai is the $100 and over “bubbly brunches” offered by practically all the hotels on Friday.  Since the weekend there begins on Thursday night and workweek begins on Sunday, their Friday is our Saturday.  Brunch is huge there and ranges from modest, no-alcohol $25 buffet brunches to expensive and raucous, club-like boozy brunches and tons of food to eat until 3 pm. 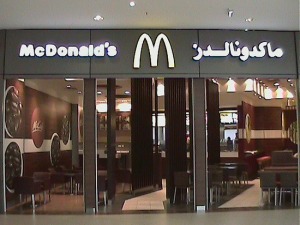 Dubai is also unique in that it is extremely international.  While locals have distinct benefits of living in Dubai, the expats who go there to work also enjoy some real advantages.  Since Dubai does not tax income, most foreigners who go there to work get to pocket all of their income tax-free.  As American workers, we are allowed an Earned Income Exemption of around $80,000 annually, and any amount above that will be subject to tax (at about 28%).  As a result, while there are tons of European, Indian, Australian and Canadian professionals working in Dubai and reaping the benefits of tax-free wages, you don’t find as many Americans there.

Living in such an international city, however, can be a lesson on its own.  My cousin’s young girls attend the American School and have a diverse group of friends.  In any classroom, you can find British, Pakistani, Lebanese, Malaysian, Columbian, Swedish, Nigerian and Canadian children all learning together, attending each other’s birthday parties and playing sports together.  You can’t teach such an invaluable and unique lesson in diversity.

The Land of Opportunity

It was so odd to come from the gloom of the US and go to the land of prosperity in Dubai.  Don’t get me wrong; the people I spoke to at the Dubai International Financial Center (DIFC) seemed a bit nervous that the political instability of the Arab Spring could harm the region’s economy, and were also wary of possible long-term effects that a European recession and continued troubled US economy could have on Dubai.

But because Dubai is somewhat of an emerging market, and because it does a lot of business (and is a major trading hub) with India and China, it reaps the benefits of the strength of those markets.  The 2008 downturn certainly affected Dubai’s economy; many companies folded or went bankrupt, thousands of foreign workers returned to their home countries, and budgets were tightened.  But it seems that Dubai emerged from the downturn in a strong position, and having learned some lessons from the troubles.  As a result, life there seems good, prosperous, and companies are hiring!

In fact, while I was there, I spent a lot of time at the DIFC, a beautiful modern complex of buildings built a few years ago that houses top-notch financial companies and law firms from all over the world.  In that complex you can find Wellington Funds, Franklin Templeton, Morgan Stanley Smith Barney, MetLife Alico, Zurich Life, Soc Gen, Credit Suisse, Latham & Watkins and so many other international companies and firms.  Obviously from the presence of these Western companies, there is a lot of business to be done in Dubai and in the region.

While it may seem chaotic and unstructured to some, there is a real sense of forward movement, momentum and opportunity in Dubai.  I’m looking forward to my next trip already, especially since my tan is starting to fade.